Prosciuttificio del Sole S.p.A. is a company founded in 1979 by Luigi Notari, specialised in the production of well-aged PDO Prosciutto di Parma.

Completely natural hams made with Italian pork free from any preservatives and nitrates. The only added ingredients are salt and the sea breeze.

The production site is located on the highlands of the upper Parma Valley, within the Tuscan-Emilian Apennines National Park, caressed by the sea breeze which, while keeping temperatures and humidity levels perfectly balanced, makes the air the third ingredient in our ham.

With strong roots in the region and a bond to traditional processing methods, it boasts a 6,500 sqm factory located near to Corniglio (PR) at 650 metres above sea level, equipped with the best technological and eco-sustainable measures, capable of handling 28 employees for producing the finest quality hams with the lowest environmental impact possible.

It makes and sells about 130,000 PDO Prosciutto di Parma every year.

Alongside having a strong presence on the Italian market with a very specific identity and a distribution network covering direct and online sales, supermarkets, high-end retail and catering, it has also established itself internationally thanks to a continuously expanding Export segment.

In fact, having consolidated its presence in Europe, in 1988, it achieved valid export certifications for the entire world, and became one of the first ham producers to break into the United States.

This was perhaps in some way influenced by a journalist from the Corriere della Sera newspaper who, in October 1984, wrote an article about the gold medal won by Luigi Notari at the annual Expo event, saying how he hoped he could also savour a sandwich filled with excellent Prosciutto di Parma San Nicola under the Statue of Liberty in the future.

Its arrival in the United States proved to be a stamp of approval that brought it to the most prestigious markets down the years, including Canada, Japan, Singapore and Australia, France, Germany, England, Spain, Switzerland, Austria, Belgium and Luxembourg.

Tradition, the region, quality and innovation are the four pillars used by the San Nicola ham factory to form the foundations for achieving excellence. 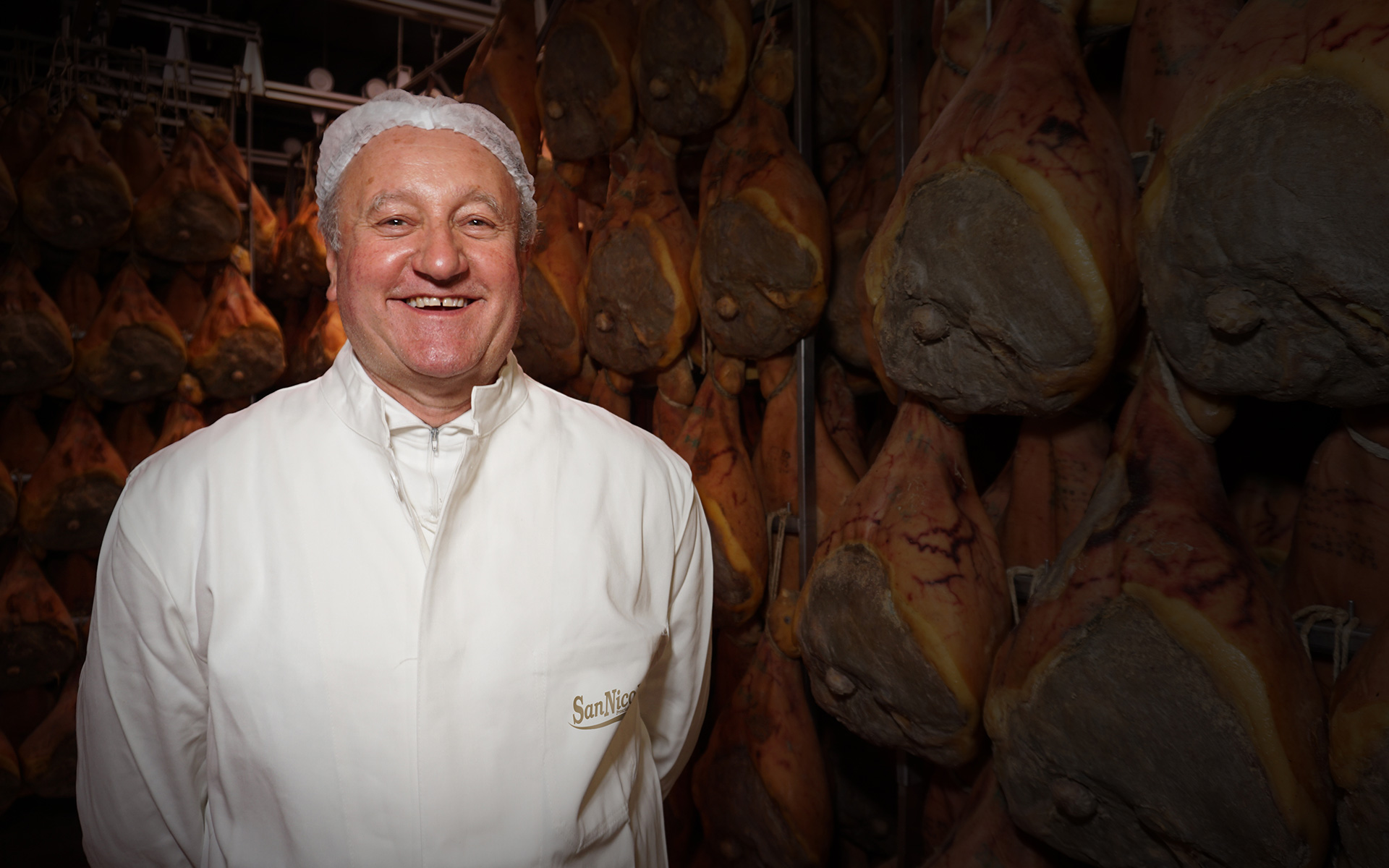 Welfare and the importance of the community

San Nicola is not just a company but a real family, which is expanding from the main group to embrace all employees and suppliers who operate in synergy with them, driven by the understanding that they are part of a cohesive group, where well-being is the key to success.

Well-being, first and foremost, in the sense of protecting company and worker welfare, achieved through a range of initiatives that extend from individuals to the community.

In fact, the belief that motivates the entire company is that only by valuing people can you achieve major results.

Great attention is therefore paid to the quality of employees and their personal and professional growth, incentivised by lifelong training and by carefully listening to everyone’s needs.

Flexible working hours and no double shifts are some of the key points of an organisation that makes sure that no one has to sacrifice their private life for their job, letting them go home at lunchtime, so they get a proper break.

This is a rare opportunity in many modern companies, but very possible at the San Nicola family, especially thanks to its very clear strategy: to prioritise local workers when recruiting.

This is not a random choice, nor does it definitely not stem from a desire to exclude but, on the contrary, to include and value local talent. In fact, this is the only way to curb the depopulation of the mountains and pursue the dream of the founder, Luigi Notari, to keep his valley alive, making it a centre of excellence, environmental sustainability and well-being, where new generations can also find work.

The technological modernisation of the factory also focuses on improving working conditions as much as possible, with next-generation machinery that supports the performance of every step.

It is a story written by the men and women who have worked right from the very first day to make an outstanding delicacy from passion, innovation, research into the best raw materials and valued workers.

Here at San Nicola, we believe in environmental well-being that stretches from the land to the people that live there and will do so in the future.

Loving the Planet means protecting and looking after it, like a welcoming home to be left to our children.

Without the Parma valleys where you can lose yourself with the view, the green meadows and the sea breeze, PDO Prosciutto di Parma would not exist, and it is precisely down to our understanding of how much the region’s biodiversity really supports its very essence that, here at San Nicola, saving the Planet is a priority.

This protection inevitably involves developing a sustainable working system, synonymous with progress and quality: for the products but also for the life of people from this generation and the next.

Right from its first few years in business, and when there was not much talk of sustainability, the San Nicola family decided that the quality of its hams had to go hand in hand with the concept of environmental protection.

This is why it has always adopted the best strategies possible so it never falls short of its mission. No stage of production, from choosing the raw materials to the actual processing, right up to transporting the finished products, is left to chance, but rather follows a precise strategy aimed at having the lowest impact possible on its region and the lives of the people who live there.

In order to get the best use of the natural air of the Parma Valley and the essential influences of the main ingredient, i.e. the sea breeze, the company has fitted enthalpic technology.

There was a time when the temperature and external humidity was considered suitable for the ageing process, and air was brought into the factory by hand by opening the high windows that always faced the valley.

Today, however, a highly sophisticated weather station detects the presence of the sea breeze and the recommended air, and then starts up automatically to let it in from outside. This not only lets the sea breeze have the maximum effect on the ageing process, but also helps achieve less heat loss and saves a considerable amount of energy.

In order to reuse the heat produced from compressors used every day, we have a system that stores it instead of dispersing it and directs it into heating water.

In order to save energy, over the years, we have sought to improve the performance of our motors for producing cold temperatures and dehumidification, following technological advancements in this sector and always trusting the most advanced models.

This goal is also helped to be achieved by the inverter, a machine that can absorb motors’ energy spikes.

Our choice of internal cleaning system is also focused on producing the lowest environmental impact possible.

Rather than relying on the use of extremely pollutant chemicals, such as surfactants, the factory is fitted with a steam machine that uses high temperatures to kill any potential microbes in a natural yet extremely effective way.

Our desire to be as green as possible does not overlook any aspect of the production process, from choosing the raw materials right up to distribution of the finished products.

The use of plastic is minimised and only involves the packaging required for vacuum-packing, which is compulsory by law, while the boxes for transportation, which were once white and therefore treated with pollutants, are now sandcoloured, 100% natural and recyclable, partly thanks to the use of water-based printing inks.

Alongside the boxes, all San Nicola brand paper products come from sustainable and respectful management of raw materials and the environment. 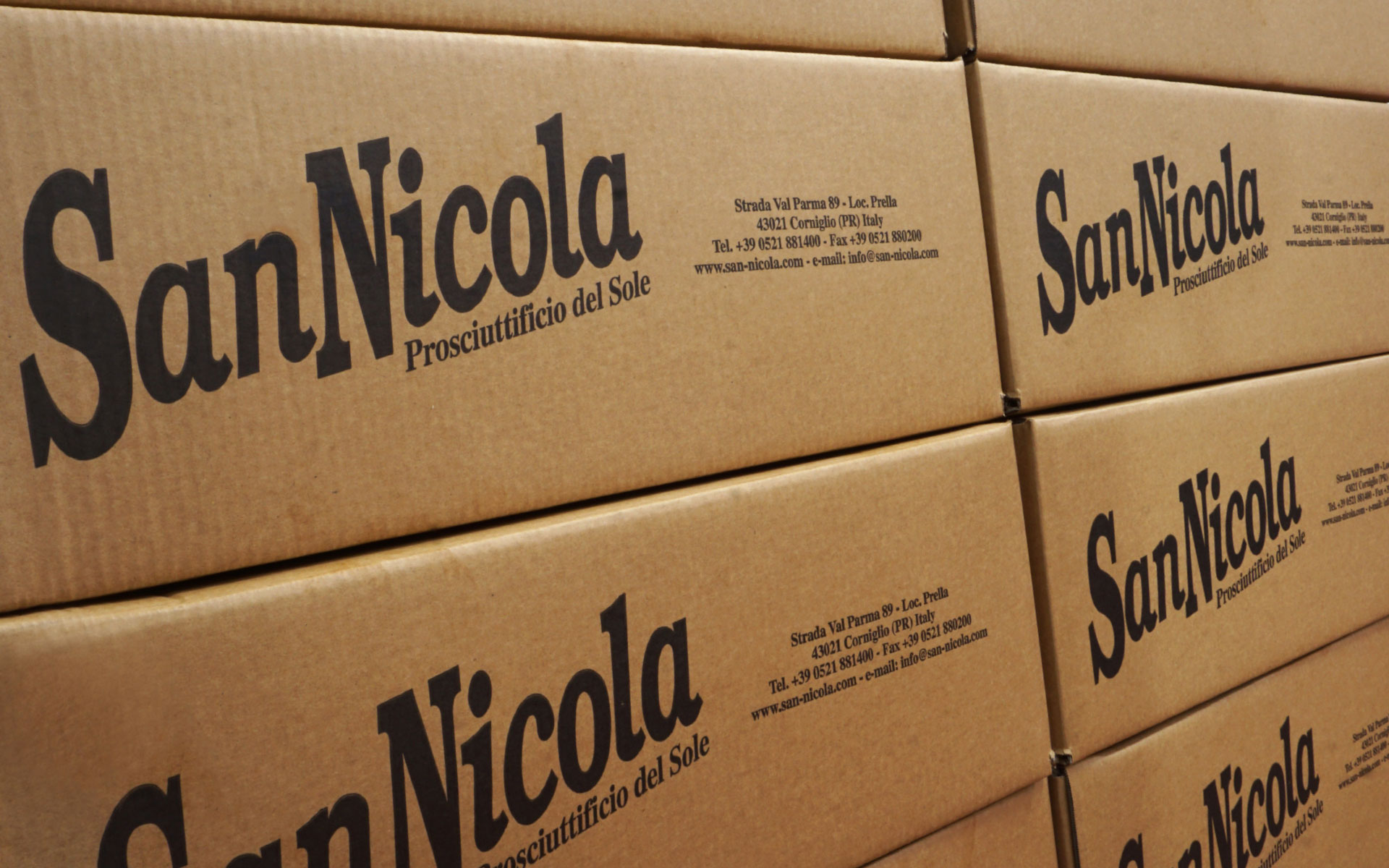 Unique flavors of local excellence for a journey of pleasure in the heart of the great Food Valley of Italy, directly to your home.